Environmental Racism's Deadly Legacy Must Not Become Our Climate Future

“She’s allergic to the air.”

Tests were run. Injection after injection was given. But the conclusion that the doctors reached was dire.

Tiny, tearful and terrified, she wandered the hospital halls trying to escape. What child wouldn’t run from the unnatural bee sting sensation of needle after needle, week after week? But ultimately, there is no running from something as intangible and omnipresent as the air you breathe.

For myriad reasons, my mother didn’t make it out of the building. She was not yet 7 years old and did not know where she was going. She was such a regular patient that the nurses knew her name and face. And lastly, she could barely force air into her lungs in the first place. Her asthma attacks were recurrent to the point where she would frequent CHOP (the Children’s Hospital of Philadelphia) up to twice a week. Breathing treatments were different in the ‘80s. My mother did not have the luxury of a rescue inhaler. If she wanted to catch her breath and find some relief, she had to suffer through multiple rounds of steroid needles.

My mother grew up in a Philadelphia housing project called Bartram Village inhaling some of the worst air in America. The city she called home was the 4th worst asthma capital in the country. More often than not, it’s minority neighborhoods like these that bear the brunt of the health risks associated with poor air quality. The asthma mortality rate in Pennsylvania for African-Americans is more than twice that of their white counterparts. Black children, specifically, are ten times more likely to die from asthma than their white peers, with a whopping 13% of young Philadelphians suffering from the disease. For Black children residing in inner-city neighborhoods, this is their harsh reality.

Philadelphia may be known as the city of brotherly love, but the way that camaraderie and love is shown to people of color alludes to a perceived sense of sub-humanity and indifference. Philadelphia burns nearly half of its trash, and 28% of its solid waste is sent to the nation’s largest trash incineration facility, Covanta Delaware Valley, in the nearby city of Chester. This is significant because Chester is 68% Black and one in three people struggle with poverty. As is the pattern, Black people and people of color are exposed systemically to higher levels of fine particle pollution which is greatly correlated with increased health risks.

Scientific studies strongly indicate that trash incinerators heavily contaminate the air, releasing chemicals that increase tumors and decrease cognitive function. Trash burning, also known as “waste to fuel”  skyrockets local residents' risks of cancer, with the rate of lung cancer in Chester being 24% higher than the rest of the state. For ovarian cancer, that figure jumps to 64%. Contrary to popular belief,  trash that’s burned doesn’t just disappear. Citizens inhale incinerated garbage in the form of toxic pollutants such as lead, mercury, nitrogen oxide, and carbon monoxide. Pollutants such as these can cause acute bronchitis, heart attacks, and hormonal defects as well as exacerbate pre-existing lung conditions.

Chester is the living example of environmental racism and health inequities. Those terms have only recently taken hold in the national discourse. But it's worth thinking about why Covanta was more likely to be sited next to a Black neighborhood to begin with. When we talk about air pollution and the increased risks for local people, it’s important to talk about which areas are looked at as predetermined sites for nuclear power plants, toxic waste dumps, chemical plants, and so on. After all, environmental racism by definition is the institutional practice of communities of color disproportionately and deliberately being exposed to toxic and hazardous waste based on their race.

The huge gap in median wealth held by Black families ($17,000) as compared to white ones ($171,000) factors heavily into environmental health disparities. Many Black Americans, due to factors such as income inequity, are confined to dilapidated, unsafe neighborhoods with low housing costs. These same poor, non-white neighborhoods — based on their lack of political and economic power — are targeted as dumping grounds for hazardous waste and noxious facilities. It is worth noting that white households often have the economic power to migrate out of environmentally hazardous neighborhoods, therefore insulating themselves from the long term health consequences.

All evidence being considered, a cultural shift needs to happen if we want these health disparities to stop. Not unlike the old lawyer joke (“How much justice can you afford?”) the link between money and environmental powerlessness in marginalized communities cannot be understated. In the American system — built on and now carrying forward the poisonous foundations of colonialism and white supremacy —  minorities as a whole hold less economic power, and therefore are  denied health equity. As long as we prioritize maximum profit over empathy and equity, negative environmental choices will always affect people of color the hardest. Race and money are two factors that should not come into play when we are talking about the distribution of natural resources like air, water, and land. But they do, and without awareness, change is impossible.

What would it be like to live in a society that did not have designated environmental victims?

In an ideal world, a huge polluting facility like Covanta would not even exist, and if it did, it would not be a premeditated and intentional choice to place it in a minority, low-income neighborhood. Truly equitable climate policy follows in the footsteps of justice. And it is just to empower those who have been historically disenfranchised and erode the systems that have allowed that abuse to continue for so long.

Collectively, it is inexcusable to continue on heedlessly as more and more high-stakes global warming related events impact our national quality of life. And we all know who pays the ultimate price and suffers most from floods, droughts, excessive heat, and more. The privileged can finance widespread migration to safer, less drastically ravaged areas. Meanwhile, our most at-risk communities operate as involuntary martyrs.

Isn’t the mantra of America supposed to echo “The New Colossus?” Give me your tired, your poor, your huddled masses yearning to breathe free? Correcting air quality and minimizing the acute effects of climate change are the only way we can even begin to rectify this issue and allow communities of color to breathe free.

One step towards collective empowerment would be increased diverse representation in law making spaces. In order to bolster inclusivity and further normalize health equity, it is vital that policymakers encourage and facilitate clean energy investments in underserved communities. Systemically, Indigenous and minority voices have not had a seat at the table and have been intentionally excluded from decision making processes. This negligent practice needs to change, and as a country, we must transition to highlighting marginalized voices and amplifying the perspectives of those most impacted by environmental injustice.

When it comes to climate change, we are in danger of doubling down on the ineffective and inconsiderate environmental practices that displaced and disenfranchised communities of color in the first place. History does not have to repeat itself.

One way that this could be done is prioritizing the entry of Black and Indigenous scientists into Congress. While ten new scientists were elected to Congress in the last three years, the candidates were overwhelmingly white. The diversity of their credentialing should be celebrated; however in the realm of racial diversity, there is more work to be done. African-American people make up over 13% of the population in the United States. I am of the belief that — similar to the 15% pledge that many major retailers took promising to pledge at least 15% of their shelf space to Black-owned brands —we should commit ourselves to electing a Congress that is at least 15% Black, Indigenous, and minority workers in STEM professions, with climate scientists and healthcare workers being given precedence. An action like this would completely revamp the climate policy that we see enacted in communities of color.

Another small piece of the solution could be a carbon tax. With a carbon tax, emitters must pay a set fee per ton of greenhouse gas emissions, incentivizing them to limit their pollution. One could envision a just outcome in which that additional carbon tax revenue would  increase direct investments in  the low-income communities who are most affected by emissions. The reconstruction of environmentally neglected neighborhoods would be a foundational step in more equitable climate policy as well, bolstering against future heat and flooding events.

A portion of carbon tax revenue could also go towards increasing urban green space, which is a beneficial triple threat. Urban parks conserve biodiversity; have been shown to aid in stress reduction and increased quality of life; and encourage a cultural shift towards mobility and outdoor recreation, as seen in green space studies done in Scotland. Moreover, researchers in England have linked urban green spaces to reduced asthma hospitalizations in areas with high concentrations of pollution and correlate vegetation to reduced air pollution.

A more drastic — and many would argue, deserved — climate-forward policy would be giving environmental reparations to historically disenfranchised cities, neighborhoods and social groups.  “Environmental justice reparations are necessary for shifting the power paradigm among communities and those committing injustices,” writes Catherine Millas Kaiman in the Seattle University Law Review. To be clear, however, monetary reparations alone would be insufficient as a solution. If people of color could collectively afford to move out of environmentally hazardous and downtrodden neighborhoods, a new class of poor would simply arise to take up residence in those at-risk communities and suffer the same consequences. Money-spurred migration will not fully address the root causes at play.

These policies all have tradeoffs, but could be important first steps toward overdue atonement. As the public saying goes, “the apology needs to be as loud as the disrespect.” Environmental racism and disrespect was systemic, pervasive, and intergenerational. Environmental reparations need to match in scale, and they must focus on the communities of color that have been most devastated.

When it comes to climate change, we are in danger of doubling down on the ineffective and inconsiderate environmental practices that displaced and disenfranchised communities of color in the first place. History does not have to repeat itself. Collectively, we must remove our rose colored glasses and act now.

No one should be allergic to the air they breathe. And while it was my mother’s unfortunate circumstance, it does not have to be mine. Slowly but surely, we can clean up the air, incentivize climate action, and incite generational change. We can dutifully revise the American Dream so it fosters a true sense of inclusion for people of color. All it takes is some advocacy, belief, and intentionality.

Amiah Taylor is a science journalist, reporting on everything from space debris removal missions to virtual reality headsets and trendy sexual health products, for places like The Observer, NBC LX and Well + Good. She is the co-founder of the literary nonprofit, Black Phoenix Ink, which creates anthologies of empowering Black children’s literature for youth in underserved communities. She has a boundless love for baby lemurs and dreams of visiting lemur conservation sites in Madagascar. 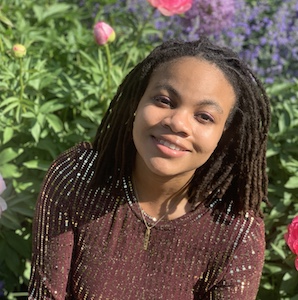