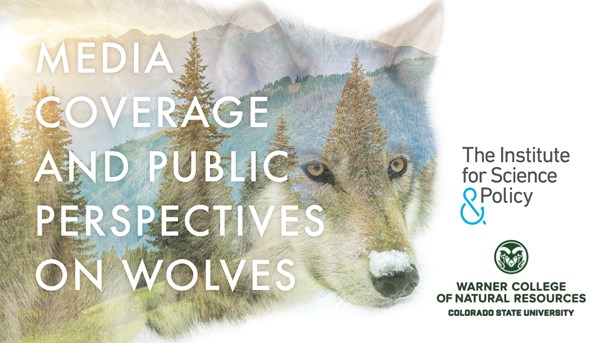 Media Coverage and Public Perspectives on Wolves
Thursday, October 1 at 5 p.m. MT
Watch the recording and read the recap

An overwhelming majority of Americans will never see a wolf in the wild. Instead, modern perceptions of wolves are predominantly shaped by folklore (like Little Red Riding Hood), popular culture (like the Liam Neeson film The Grey), and especially media coverage (usually pertaining to conflict over the species’ protected status). The perceived dangers or benefits of wolf reintroduction will determine the success or failure of the November ballot initiative in Colorado, and journalists and scientists play a key role in that discourse. So what does responsible reporting on wolf issues look like in the modern age? And how might social science research help us to better sort fact from fiction?

In the second episode of our ongoing series about wolf reintroduction in Colorado, we’ll chat with Sam Brasch, Reporter at Colorado Public Radio, and Rebecca Niemiec, Assistant Professor, Department of Human Dimensions of Natural Resources at Colorado State University. They’ll examine the recent history of media coverage around wolves and discuss ongoing studies around public attitudes, then address a few of the most commonly held misconceptions. They’ll also answer your questions during a moderated Q&A session.

This free public webinar is presented by the Institute for Science & Policy and Colorado State University’s Warner College of Natural Resources, in partnership with the Center for Collaborative Conservation, the Center for Human-Carnivore Coexistence, CSU Extension, and the Denver Museum of Nature & Science. The session will also be streamed on Facebook.