This article first appeared on SAPIENS and is republished with permission.

Several weeks ago, I finally entered the 21st century. I didn’t get the latest smartphone, AirPods, or an electric vehicle, nor did I join the Noom diet. I got a homemade mask to wear in public during the COVID-19 pandemic. My new mask replaces a beloved, fluorescent-pink bandanna I’ve been using until now.

A talented friend of mine has been making masks using fabric left over from her sewing business. She made five of them for the Nash clan—one each for me, my wife, and our three sons. After she dropped them off at our house, we laid them on the dining-room table and stared at them as a group. Before I could say anything, the boys grabbed their favorites, as if someone had broken open a piñata, and ran off.

Frankly, I don’t care what my mask looks like, although I’d probably draw the line at one decorated with a penis design. (I do appreciate the maker’s spirit for that one, but it’s not really my style.) My boys went straight for the “coolest” patterns in the pile: the Colorado flag, baseballs, and simple small, white triangles on a brown background. For the record, my wife and I got an abstract floral pattern and stylized dogs.

As an anthropologist and a museum curator, I revel in the curious, the different, and the unusual. This experience certainly falls into those categories. The whole thing got me thinking about the history of masks worn in different places, for very different reasons.

Some are designed to transform the wearer—from the animal masks worn in some Indigenous ceremonies to Halloween disguises. Some are identity markers, which are used to communicate membership in one group or another. This is how my sons are treating their COVID-19 masks. (At least the two quick enough to grab the Colorado flag and the baseballs. The small triangles? Not so much.) And yet others are meant to be functional protection against disease—including a strange bird-like mask once worn to guard against the bubonic plague.

Archaeologically, we don’t know when our human ancestors first made and wore masks.

The earliest well-documented masks come from the arid Judean Desert in the Middle East about 9,000 years ago. The chance that these are the first masks ever made is nil; these are simply the earliest preserved masks that we currently know of. Older masks were almost certainly made of perishable materials, such as leather, feathers, pigments, or plant remains—all materials that don’t preserve well in the archaeological record. 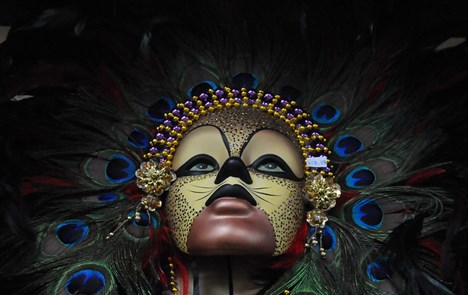 The first mask may have been in the form of branches, mud, and leaves strategically placed on the face to provide camouflage during a hunt or skirmish. Or, it may have been in the form of red or yellow ocher, or another pigment, used to highlight (or hide) facial attributes in order to enhance beauty. (This begs the question of whether people are wearing “masks” when they put on makeup; I would argue the answer is yes.) The idea for the first mask may have even come during an early game of peekaboo, in which a parent or other adult surprises a child into laughter by hiding behind a tree or a pair of hands.

Whatever the case may be, it’s clear that masks have been an important cultural phenomenon for tens of thousands of years. All cultures make (or made) them. Some, like ancient Egyptians, made funerary masks to hide the face of the deceased and prepare her or him for the afterlife. Others, like the Kwakwaka’wakw (commonly known as Kwakiutl) of British Columbia, make and use transformation masks, which transform the wearer from one being to another during ritual ceremonies.

In addition, masks are used for protection, as with goalies in the National Hockey League. Masks are also used in revelry, such as during Mardi Gras in New Orleans, thus allowing the wearer to engage in activities that would be less socially acceptable during normal times. A history of masks reveals how they can terrify or entertain—sometimes doing both at once.

It’s clear that masks have been an important cultural phenomenon for tens of thousands of years.

All of which brings me, in a roundabout way, to the single most terrifying mask I’ve ever seen: the doctor of the plague mask from 17th-century Italy.

The bubonic plague (a.k.a. the Black Death) arrived in Europe in 1347, when a fleet of ships docked at the Sicilian port of Messina with crews that were gravely ill, if not dead. Over the next five years, roughly one-third of the population of Europe succumbed to the plague—more than 25 million people. Subsequent waves over the next three centuries killed a staggering total of between 100 million and 200 million people.

The 17th-century doctor of the plague played several roles. In addition to caring for those stricken with the disease using standard treatments of the day, that person was also responsible for burying the dead, administering last rights, documenting last wishes, hearing last wills, and tabulating census records for public logbooks. In effect, the plague doctor was also a nurse, an undertaker, a registrar or county clerk, and a priest, rabbi, or imam all rolled into one. The plague doctor’s uniform—the personal protective equipment (PPE) of the day—is now iconic.

A 2019 article, “The Plague Doctor of Venice,” details what served as PPE back then, as perfected by French medical doctor Charles de l’Orme (1584–1678): a flat-topped leather hat, a bird-like mask replete with goggles and a beak, a leather robe, and a baton that had tempus fugit (Latin for “time flies”) written on its handle.

Why the beak? It contained aromatic herbs impregnated with “Venetian [or London] treacle,” an ancient medical formula containing over 60 ingredients that was thought to have curative powers. Even if the supposed powers didn’t work, at least the aromatics filtered the noxious and overwhelming stench emanating from the sick, the dying, and the dead. It’s even possible that the cumbersome beak helped to create a small amount of “social distancing.” Given that de l’Orme lived into his 90s—a remarkable old age for the time—he may have been on to something, but I’m not going to test that assertion.

It’s hard to know what people think in their last moments, but I can’t imagine the doctor of the plague was a comforting sight—unless people recognized the masked doctor as their last and only hope.

Up until the COVID-19 pandemic, I used to think people wearing masks were hiding something. I rarely find masks, and by extension costumes, to be fun: I don’t particularly like Halloween or Mardi Gras. Now I’m coming around to the idea that people in masks are being cautious and considerate. Impressions change, as do fashions.

Perhaps my boys will come around to wearing stylized dogs and florals after all. 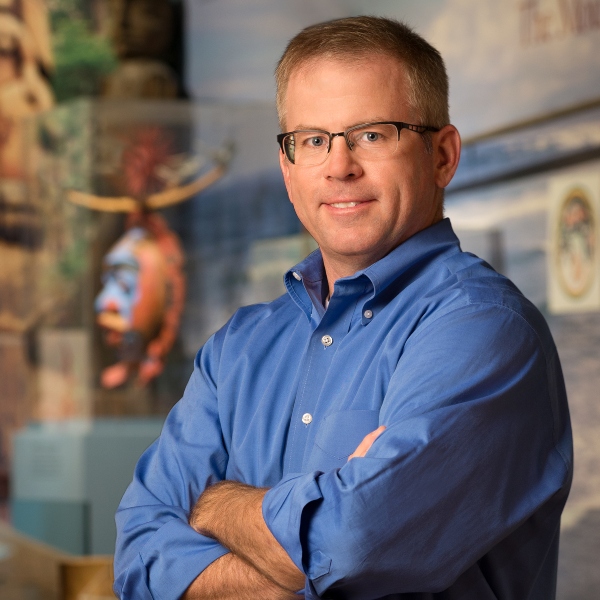 Director of Anthropology of the Denver Museum of Nature & Science